As per Orwell, the all-encompassing state would set up the surveillance. But as per Tech Crunch, they hit upon the much more elegant solution of freely selling it to us for a premium.

How did they do it? Well, as I’ve joked before, we all want to be like Picard ordering our house to make us a drink and play us a tune. That future is essentially here. But Picard never had to worry about the Enterprise selling his information to the Romulans.

The further joke is that some people don’t seem to care if the Romulans do find out; in fact, they assume that they would find out any way so why bother?

Name an app that doesnt ask you for access to a whole bunch of your personal info just in order to use the app. You’re on the internet, with a device that tracks your location… you grew up in the age of Facebook and consent documents signed with the push of a button… you’ve been adequately warned.

I think this may be overlooking the point.

The issue here is not that you may get some targeted ads, but that literally everything about you – your movements, behavior, purchases, etc. – is being used by other people, without your own consent, and often without even your knowledge. That info is currently used mostly for marketing… until it’s used for other things that nobody wants to happen.

Seriously… like what? And again…. you’ve given your consent to allow them access to all of this info.

Well – like a government getting its hands on what the companies know and just keeping tabs on people whom they think are troublesome. Look at Virginia today and ask yourself, to what ill use would such a government put that info as pertains to who owns what, where they work, where their kids go to school, etc? As it is, we have private persons getting their hands on that info and stealing people’s identities, or swatting them for slights real and imagined, or causing them endless grief by leaking private data to employers or places like Child Protection Services.

But even if that worst fear is never realized, it’s the principle that matters: nobody should know your personal business. Using a program and device to help you with your finances should NEVER give the programmer of the app, nor the creators of the device, blanket permission to also use that data. Neither should they force you to give them that permission in order to use the app. You used to buy a computer and a program and it was understood that whatever you did with them was your business alone, unless you were trying to invade other people’s business thereby. Now the computer and the program themselves are routinely invading our business, and we’re not supposed to be alarmed merely because they all do it? That’s MORE alarming, not less. Imagine a world where your car rats you out to the cops when you speed and they can kill the motor remotely… or where a contractor claims 24/7 access to your home because they’re the ones who built it… or a grocery dictates your diet because they sold you the food.

It might sound paranoid, but the idea was once equally absurd that Apple or Google would be entitled to unfettered access to everything you did with their device or product. That certainly wasn’t at all the situation when it was a Commodore 64, or an IBM clone running DOS and Netscape. Now it’s actually the default assumption! In – what, twelve years? – we’ve gone from “It’s yours once you’ve bought it” to “Well, what do you expect? You were warned!” People are completely losing all sense of privacy and agency and it won’t end well. 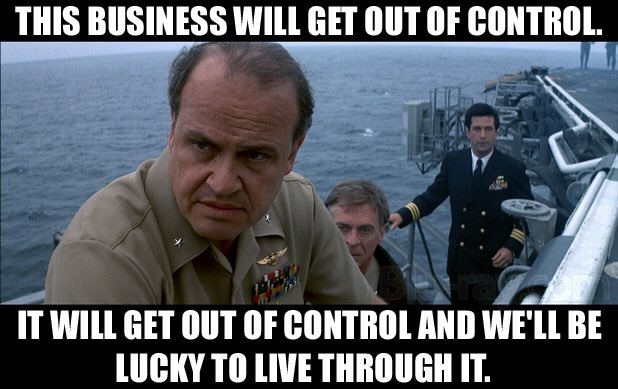 Some of these programs don’t offer any alternative to letting them spy on your most sensitive personal information; or else they let you “change” the option from “Hey, go ahead” to “Hey, pretend not to but still go ahead.”

It doesn’t stop there, of course. Streaming’s great for convenience, but that means that the movies and music you enjoy aren’t ever really yours. Again – you used to buy a record or a CD and that was that. Now if someone else thinks that you shouldn’t be listening to this or watching that, they can just yank it from the service. Or, worse – nobody has to really think about it at all, it can just be run remotely by algorithm, and there’s nobody to appeal to because there’s nobody who actually made that decision, and thus no individual who’s responsible… least of all YOU, the end user. There are many such stories of people who bought digital copies of items that were altered or erased, and many others of news sources stealth-editing their articles and binning the originals, without so much as an acknowledgment.

Totalitarians of old could only dream of such reach, such power. All for our own good, I’m sure we’ll be told, exactly as they say now when they remove more and more choice from we, the actual people who must live by those choices.

Find it by date

What’s it all about?